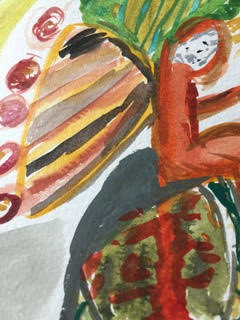 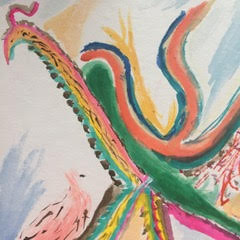 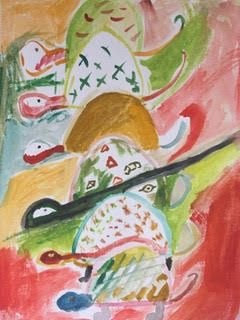 My watercolors and charcoals stem from the mystical path that I have pursued for the last 30 years. I am deeply connected to the human and angelic realm, as I am to the animal realm. the insect realm, the realm of plants and the realm of the spiders. In short to the created world.

Animals, insects etc. have singular attributes and adaptations, which, if we look, have the capacity to teach us about our own nature and the nature of reality. In addition to their attributes, ancient cultures ascribed to animals mystical powers, so beautifully described in Native American culture and in many other cultures as well.

It is this that I am drawn to represent.

This seems particularly important in a time when the human sense of supremacy over the animal kingdom is destroying our heritage, our connections to the earth, and to ourselves.

I draw inspiration form Egyptian funerary art, from myths, from photographs of other realms, from chance encounters with various beasts, and from my own imagination which is fed a great bounty because of the tonal sound work that I do; The vibrations produced by my own voice releases creativity.

I grew up in Brooklyn and have spent my life in the New York City area (with the exception of 2 years in Paris). I graduated from NYU with a Masters in History, did lots of jobs I didn’t like, principally on Wall Street, before finding myself in Sound and Art at the age of 40.

Here are samples of my work. Two are hanging in individual collections.

I am 76 years old and came to painting late. For the past 30 years, I have been working with sound, sounds vocalized by my own voice. The system I developed is called MediSounds and this practice connects me to my deepest self, and to the cosmos. It affords the same benefits to those who hear it. In addition to working with students in sound healing, I write poetry and have written a book about MediSounds.

I always said that if I could paint I wouldn’t write poetry.

About three years ago I decided that I wanted to express myself through visual arts and hit on calligraphy as a way to start. There was a form that I could stick to, and if I practiced could potentially become good at it. But I very rapidly tired of it. I didn’t want to draw beautiful letters ---whether they were Hebrew, Japanese or English.

In the last year ,I was helping my daughter as she dealt with an aggressive form of leukemia (AML) and a stem cell bone marrow transplant, harrowing dosages of chemotherapy, and terrifying potentials. When she completed this phase of her treatment and was able to return to her family, I came back to New York from California,

And suddenly I began to paint, in a great creative rush--joyous vibrant paintings.